This is a short story.

It runs in the family on both sides for generations. We are short.

I found Eric online. I don’t admit that often. He is, as he and his profile and his photo described: funny, charming, kind, creative, hard–working, music-loving and handsome with a great smile. All true but for this one thing: his profile stated that he was 5’3”. I thought, Perfect! A nice, music–loving guy, a few inches taller than me! Great!

As is turned out, we had a mutual friend that I credit with introducing us in person so that I didn’t technically meet my husband on the internet. Jodi brought him to my work-place to me one day, which surprised me almost as much as realizing that he was not 5’3” – he is 5 feet and almost 1 inch. Just like me.

Hannah was born weighing just under 7 pounds. Good and healthy. As she grew she was small and we were repeatedly told by her paediatrician that all is fine with the then familiar refrain, small parents – small child. It made sense. It fit.

When she was three years old, that refrain became less relevant. She wasn’t growing. A battering of invasive test revealed what for Hannah defined her stature as more than small parents–small child. She has Celiac Disease.

Celiac Disease is is a digestive disease that damages the small intestine and interferes with absorption of nutrients from food. People who have Celiac Disease cannot tolerate gluten, a protein in wheat, rye, and barley. When people with celiac disease eat foods gluten, their immune system responds by damaging or destroying villi, the lining of the small intestine that allow nutrients to be absorbed. Without healthy villi, a person becomes malnourished, no matter how much food one eats. Celiac Disease is managed solely though diet. By eliminating all gluten from her diet – her villi will heal, she will get the nutrients that she needs to thrive and grow. Almost three years later, we’re back on the charts and she’s growing at a normal rate.

But the refrain still holds true – small parents – small child. We’re a family and we fit. Hannah doesn’t realize that people often look at us with disbelief when she says she’s 8 years old and finishing Grade Two. We don’t care that she wears a size 5 in jeans and that she’s still in a 5–point harness car seat. None of that really matters to her either.

What matters to her is this: she can’t play on the monkey bars at the park like her friends, she can’t go on all of the water–slides, that she is often delegated to be the baby when playing house, and that she can’t hold a baseball bat as well as her neighbour who is 2 years younger than she is. These are things that matter when you’re 8.

And I don’t disregard it.

I remember what it was like. One of the most outstanding of all of my memories was in high school. I was slow–dancing with a guy at my prom. He was on the basketball team and more than a foot taller than me. Because he could, he picked me up as we danced, my feet dangling in the air. He smiled. They all did. It was cute. I was cute. Oh, how I wanted to be beautiful that night, like my friends. It was my prom.

Everyone looks at Hannah and says that she’s cute. And yes, she is. But I remember how I cringed at hearing that word so often. I look at my daughter, and see that she is beautiful – inside and out. I talk to her often about what is important. I am forever telling her that what I love the most about her is that she is beautiful – inside and out – that she is kind, generous and thoughtful. [Note to self: stop telling Hannah how cute she is and keep telling her that she's beautiful.]

When I talked to Eric last night about it, he told me that he had also recently talked with Hannah about it too. She was disheartened and discouraged playing baseball. He told me that he explained that because she’s small, she might have to work a little harder at some things. He told her that being small, however, will not be an obstacle for everything. He cited me as an example. Look at all that Mommy has accomplished. She’s not in the newspaper this week because she’s not tall. She’s in the newspaper this week because of what she has achieved. And that is why it’s always been ok with me that he said he is 5’3″.

When you stand tall, reach far, aim high or dream big – being short or being tall doesn’t mean a damn thing. 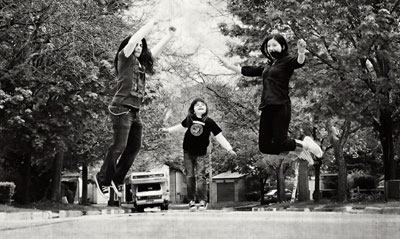