May marks the release of the Top Baby Names, according to the data collected by US Social Security Administration. There is not a Canadian equivalent available of this data, but given the close relation of our culture, I’m quite confident that the results would be similar.

I see baby names every day and some days, weeks, and months, I note that some are more popular than others, and the popularity of some names grow while others fade. The Top 10 Baby Names, according to the US Social Security Administration, held few surprises for me. 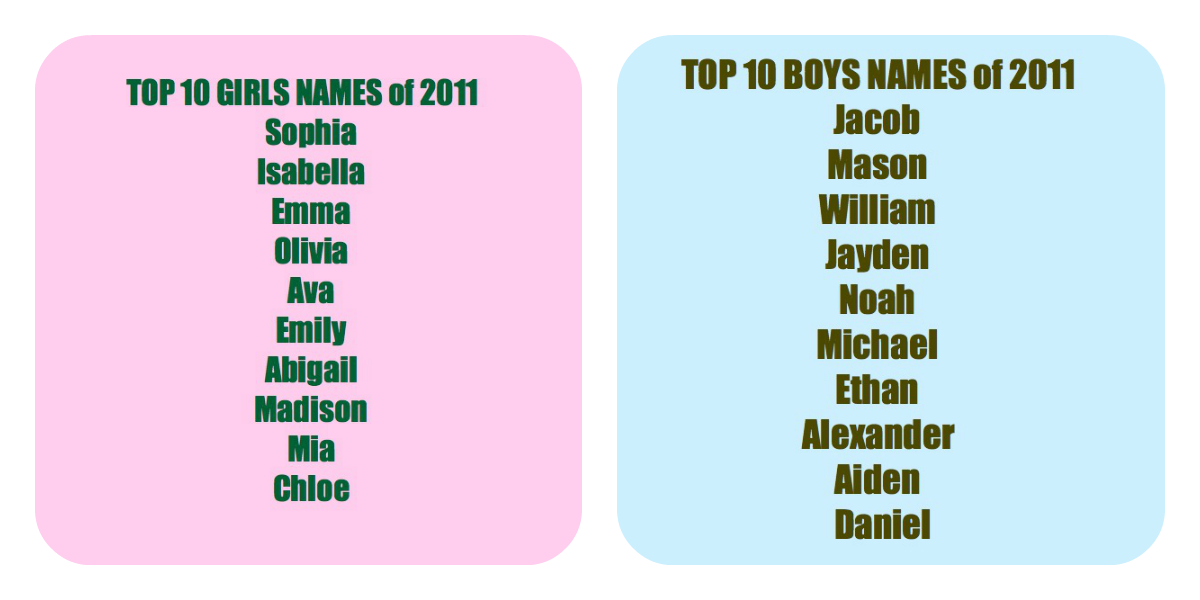 So, like I said, there were few surprises, but that’s not to say that there were none. Mason broke into the Top 10 this year (last year it was at #12). There might be some weight given to the popularity of the name owed to the Kardashians. Kourtney Kardashian named her son Mason at the end of 2009 and since we hear so much about the Kardashians, the name Mason might have just squeezed its way into the subconscious of new parents. Chloe has been in Top 10 since 2008 and it might interest you to note that Chloe with a K cracked the Top 50 in 2010. Keeping Up With The Kardashians premiered in 2007.

I wanted to take a closer look at a few of the Top 10 Baby Names and found some interesting statistics:

I wanted to note that there are a few names that through my business—Name Your Tune, where we make personalized CDs for children—I have seen gaining popularity. While they might not be on the Top 10 lists, some of the names that we are seeing a lot of lately include:

Did you consider these lists of popular names when you were choosing your baby’s name? Did you decide to keep or toss a name from your own list of names, because they are on these lists?